Somewhere Between Black and White… Therein Lies the Truth 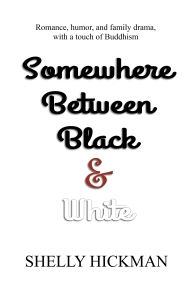 Have you ever felt an instant attraction to someone, felt like you’ve known them before, or felt at home with them right away? Could it be because you’ve had a past-life connection with them? This idea has been explored in my own books and in a wonderful read I just finished, Somewhere Between Black and White, a multi-layered, complex, thoughtful love story by Shelly Hickman.

Sophie, the heroine of Somewhere Between Black and White, isn’t one to put herself in another person’s shoes before making judgments, until she falls under the influence of the calm and cool Sam… and then the fun and her growth into a better person begins.

In this novel, Hickman’s lovers Sophie and Sam have been a couple in a past life, a past that Sophie “sees” when she first kisses Sam, a past she uncovers as their relationship develops. Sam’s Buddhist philosophy is one he learned in this past life and is one he more fully embraces in his current incarnation, and shares with Sophie, helping her in all her relationships. She becomes more understanding of her ill sister’s choices and more accepting of things that she found impossible to comprehend before.

The growth of all the characters in Somewhere Between Black and White is inspiring… wouldn’t we all be happier and healthier if we gave up judgment of others, and embraced kindness and compassion instead? I love the tingle that I get from romantic novels like this, and find it a bonus when there’s a lesson that the story leaves me with as well. The Buddhist tenets of non-judgment and non-attachment come across very well in Sam’s actions and we the readers, as well as Sophie, benefit from his teachings.

Here, author Shelly Hickman answers my questions about Somewhere Between Black and White:

BECCA: I enjoyed reading your work of fiction and finding an inspirational message, specifically the Buddhist tenets of non-judgment and non-attachment. How did you see these teachings integral to the growth of your main character?

SHELLY: When I began writing “Somewhere,” I wanted the theme to focus on our tendency, as a society, to judge others. I’m not trying to imply that there shouldn’t be consequences for our actions, and that people should be able to do whatever they like with no repercussions, but so often we assume we know another’s motivations and make snap judgments about people and what they’re about. But the truth of the matter is that, as the saying goes, we can never understand another’s choices until we’ve walked in their shoes.

Sophie is the personification of this shortcoming. Though her intentions are good, her love and concern for her sister blind her to the possible suffering of Christian, her brother-in-law. Because she refuses to consider life through his eyes, even briefly, she is quick to write him off as worthless. At the same time, it’s her attachment to her sister that makes her so overbearing, and oftentimes, obnoxious.

BECCA: Do you include many of your own experiences into your fiction?

SHELLY: Generally, it’s the little details throughout my novels that are from my own life. However, my first novel, Believe, was hugely based on experiences I had when my daughter went through treatment and passed away from cancer. My upcoming release, Menopause to Matrimony, also has quite a few references to things I’ve experience with the onset of perimenopause, and I’ve tried to approach them in a humorous way.

BECCA: What is the importance of the past-life connection between Sophie and Sam? Did they have specific lessons they still needed to learn from each other?

SHELLY: With the past-life connection between Sophie and Sam, I tried to show an ongoing mutual benefit they receive from their relationship. Sam (Matthew in a former life), was significantly impacted by his friendship with the Buddhist soldier, Ping. That lifetime was part of Sam’s “schooling,” for lack of a better word, that made him who he is in this lifetime. Sophie is kind of his learning partner, and although Sam is more evolved than Sophie, her presence in his life makes him better. She gives him the opportunity to practice the patience and tolerance he feels is so important, and at times, she expressly reminds him what he believes. For instance, when Matthew and Natalie argue about his need to avenge his father, Natalie calls him on his beliefs, and points out that he should let the man upstairs handle it. We don’t know the details of the loss of his father, and we really don’t really need to. All we know is that he’s angry and bitter, and Natalie (Sophie) is there to challenge him—does he buy into what Ping tried to impart, or not?  I feel Sam’s prior connection with Sophie, along with his forgiving nature, allow him to see past all her strong opinions to the essentially good heart underneath.

BECCA: Can you explain why Sam liked to say, It’s all good? How can we, as your readers, apply this in our lives?

SHELLY: Sam sort of addresses this idea when he shares his thoughts on the meaning of soul mate. He believes a soul mate is someone you learn from and who helps you grow as a person. I think we can all acknowledge that difficult circumstances, as well as difficult people in our lives, often help us grow. So when Sam says, “It’s all good,” he’s talking about in the big scheme of things. In my opinion, we’re all here to learn, grow, and love, and often we don’t do that unless we’re put in challenging, and sometimes painful, situations. I don’t know what it is about humans that we have to learn the hard way. Though easier said than done, I think when we’re going through a difficult or painful time, if we can manage to step back and try to learn something from it, in the end, “It’s all good.”

BECCA: What hope or message do you wish to offer others with this book?

SHELLY: The main message I wanted to convey with this book is that we should at least try to see things through another person’s viewpoint before getting all judgey on them. It’s difficult. I think the older I get, the more judgmental I’ve become, but in truth, when I try to see a situation through someone else’s eyes, I can’t help but be more compassionate, which makes me feel better, rather than having the opinion that people just suck.

BECCA: What themes are you addressing in your other three books?

SHELLY: As I briefly mentioned earlier, my first book, Believe, is quite different than what I now write. I wrote it after losing my daughter as a way to work through my grief and anger. The writing is quite bare, and because it has a lot of metaphysical elements, it’s not for everyone. Believe was something I had to write as part of my healing process, but I also hope that anyone who reads it might find it healing as well, especially anyone who has gone through horrible loss.

My third book, Vegas to Varanasi, and its sequel coming November 1st, Menopause to Matrimony, are very different than my first two. There’s no intended deeper message in these novels. They are romantic comedies that are meant to entertain, and hopefully give the reader a chuckle or two. However, in all of my stories, I attempt to show the human side of characters who create the conflict. Although there are people in this world who are truly awful and mean-spirited, I prefer to fill my stories with characters who still have endearing qualities, despite causing grief for the main character. Even “villains” aren’t one-dimensional. Not sure if I pull it off or not, but it’s my goal, at least.

BECCA: What suggestions do you have for other writers who feel they have an important message to share?

SHELLY: Try not to beat the reader over the head with your message, although this can be challenging. Because you will never please everyone, some readers will flat out miss your message, while others will think you forced it. It’s difficult to create a balance where the reader can come to conclusions on their own without spoon-feeding. Readers have sometimes said that in Believe and Somewhere Between Black and White, that they didn’t “get” certain elements, or that I left out too much information and rushed through. I will admit that I have always had problems with brevity, and I think that’s because of the kind of reader I am. I don’t require or even like long, drawn-out descriptions and explanations, and I’m quick to axe material I feel adds nothing to the story. And back to being cautious about spoon-feeding, I like to believe that readers will take away ideas or impressions from my intended message that I had never even considered, which is awesome!

Somewhere Between Black and White is available on Amazon.com. For more information on Shelly’s writing, please see www.shellyhickman.com.

Finding Vern – Love in the Afterlife

Edutainment – Free for Next 9 Days

Comments on: "Somewhere Between Black and White… Therein Lies the Truth" (2)