How to Join the Global Prayer Action for #StandingRock – Saturday, Jan 28 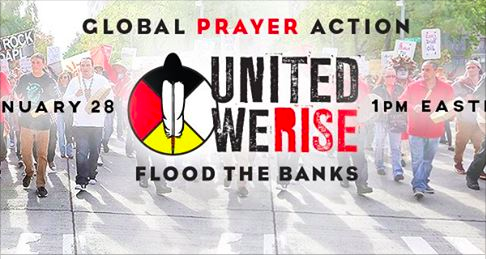 Join people around the world this Saturday, January 28th, 1 p.m. Eastern time, to carry the prayer from Standing Rock to the steps of banks around the world who are funding harmful Oil Extraction.

If you’ve been reading news about President Trump’s Executive Actions this week, you know that prayers are needed to help the protestors at Standing Rock.

President Trump has effectively declared war on environmental protection, according to an opinion piece in the L.A. Times:

On Tuesday, he signed executive orders that took the first steps toward reversing Obama’s rulings against oil pipeline projects. One of those rulings, from the Army Corps of Engineers, told owners of the pipeline to come up with alternative routes that would not endanger the water supply of the Standing Rock Sioux tribe in North Dakota.

Now, the Army Corps of Engineers is being ordered to “review and approve in an expedited manner” the North Dakota pipeline plan of Texas-based Energy Transfer Partners.

BECOME INSPIRED TO JOIN IN PRAYER WITH STANDING ROCK PROTESTORS 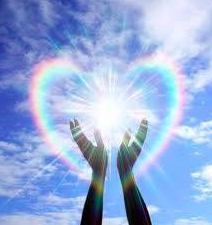 Unite in Global Prayer Action to elevate the consciousness of the financial institutions and governments, asking that they make the choice to invest in clean renewable energy, the future of our planet, and the protection and rights of all people.

PRAYER IS ENERGY HEALING IN ACTION

Do you get discouraged if your prayers aren’t immediately answered? The problem may be that we are praying for God or a higher being to do something which it is not in its nature to do… take direct action vs. inspire and guide us to make the right choices.

In prayer we are trying to do something or to get something done, either for ourselves or for someone else. We pray to get an effect, and since an effect is involved, energy has to be involved, and all prayer involves the transmission of energy, [in this case toward the people and situation at Standing Rock].

In the prayer form known as the Lord’s Prayer that is found in the Christian Bible, Jesus states that we should ask for energy (“our daily bread”), cleansing (forgiveness), and guidance. A little further on in the chapter of Luke (11), Jesus makes the famous statement about, “Ask, and it shall be given unto you….” This has been taken to mean that you can ask God for anything you like and you will get it, although in practice it obviously doesn’t work out that way. The reason is revealed only a few lines further. What is to be given is the Holy Spirit. In other words, energy, ideas, and inspiration. We find this same idea in the Old Testament, in Sufi, Hindu, and Chinese writings, as well as in Hawaiian – namely that what we receive from above is the wisdom and the power to act. But it is we who must do the acting.

This brings us to the point of fact that there are essentially two types of prayer: vertical and horizontal. By vertical prayer, I mean that which is directed toward God or the Higher Self or toward someone in spirit. From this type of prayer we can only get inspiration, knowledge, understanding, and energy. Note carefully that the guidance we may get is in the form of ideas and inspiration. We do not actually get the kind of guidance that tells us exactly what to do and how to do it. That kind of guidance implies the making of choices, and that is our sole prerogative.

Horizontal prayer is that directed toward our everyday life, either to heal or help ourselves or others, or to change the future. This type of prayer is accomplished by us, and its effectiveness is determined by our beliefs and by the amount of energy we put into it. We each create our own experience of reality, the circumstances we find ourselves in, and through prayer properly understood we can change those circumstances. But it is the individual who changes the circumstances, not God and not the High Self. From them we only get the tools; they will not do the work for us.

Please join in The Global Prayer Action for Standing Rock so that all involved get the guidance to resolve the situation in a peaceful, environmentally-conscious manner.

And please share this and invite your friends to help support the protestors at Standing Rock.

What Gives your Life Worth? Book Review and Interview on THE OARSMAN