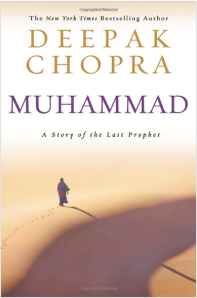 I read Deepak Chopra’s book on Muhammad in the same light that I read his fictional accounts of Jesus, as the son of God, and Buddha, as one who achieved cosmic enlightenment… for insights into the men that founded our world’s largest religious forces. All three novels describe the lives of these religious leaders, show how they were guided to higher consciousness and how they changed the world around them in doing so.

Having little knowledge of Islam, I was fascinated by Chopra’s depiction of the Arabian culture and polytheism of the time and how Muhammad brought monotheism and a guidebook for the chaotic Arabian culture to follow – the Koran (which was supposedly revealed to him through Allah and the Angel Gabriel).

Muhammad’s story is told through many voices, from his wet nurse to his dire enemy, each writing a chapter, depicting how his early life was filled with portents and omens that he would be a “prophet.” Muhammad is described as reflective, humble, loving and in search of answers to life’s great mysteries. We, the readers, are led to cheer for Muhammad and hope he escapes the persecution that surrounds him as he reveals his instructions from the Angel Gabriel.

However, in this time of terrorism, it is disturbing to read of the “holy wars” which God later instructs the Muslims to wage in order for Islam to spread. Chopra ends the book with the dark underside of Muhammad’s mission… using warfare to spread the new faith.

Chopra puts Islam into the context of Muhammad’s time, the sixth and seventh centuries, when the Arabs were cut off from their past monotheism as the descendants of Abraham, and from other monotheists, the Christians and Jews. As the “Last Prophet,” Muhammad ends tribal turmoil by uniting the Arabs under one God. His transformation from an ordinary man, an illiterate one whose “recitations” while in a trance state are recorded as the Koran, to the founder of our globe’s largest religion, is one that is both intriguing and surprising.

This book is a good starting point to learn more about Islam and other religions, so as to better understand the beliefs of those inhabiting our same world.

Becca Chopra, author of The Chakra Diaries and Chakra Secrets

Becca, how can I incorporate my Christian beliefs into my chakra balancing practice?

Thanks for your question.

Deepak Chopra offers sage advice on transforming your life, from a Christian perspective, in his novel “Jesus.” While many Christians may not agree with his fictional account of Jesus’ lost years before his ministry began, they can reap new insights from the Readers Guide – Jesus and the Path to Enlightenment. He writes that Jesus was the product of transformation and that he wanted others to be transformed also, giving up unloving, violent, selfish and narrow-minded attitudes and offering only love and peace to the world. He describes how all Jesus’ teaching was in service of one objective: to find the way back home, to oneness with God. Not so different from moving from the material plane, starting with the root chakra, and working our way up to oneness by opening the crown chakra. While Christianity offers prayer as a way to “transcend,” Eastern spiritual traditions offer meditation, such as used to balance our chakras. Both quiet the mind and expand it beyond everyday boundaries.

He offers a wonderful meditation on the heart chakra: Sit quietly and let your attention go to the center of your chest, focusing on your heart. Softly bring your attention back when emotions, sensations, feelings or images arise. He says hidden memories will resurface; repressed emotions will flow. Soon the experience will shift as you contact the heart as a center of tenderness and love. As you move toward silence, the door will open to an invisible presence. The more you sit with it, the more it begins to express attributes of God, such as love and tenderness, power and strength.

Deepak Chopra’s explanation is that Jesus was teaching how to find the source of all God’s qualities inside yourself and ultimately to embody them. Working on the chakras will help you to embody these qualities… which to me, makes it in line with Christ consciousness.
Namaste! Becca
Visit my website here