A Novel Look at Love and Forgiveness – IMPLICIT: Soul Invictus #BookReview and #AuthorInterview 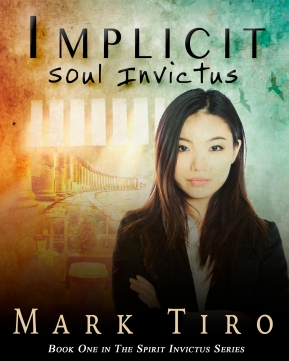 IMPLICIT: Soul Invictus contains both wildly imaginative stories of a woman’s many incarnations, worlds, and adventures, and a profound discussion on the meaning of life, love and forgiveness.

Maya Lee is a law professor holding a grudge, which we might all do if we were in the same situation – being unjustly fired. But as we follow her soul through many other incarnations in both ancient and modern times and places, a theme emerges – about forgiveness, about love, about what is real and what isn’t.

“It’s not what happens in life, but our opinions about what happens that trouble men… Or women,” she learns in one of her incarnations.

In another incarnation, as a lawyer in ancient Rome, the protagonist Marcus learns, “…try your best, right? But then just let it go. Stop thinking about it.”

As the reader, we learn along with the characters – “Forgive, and only love remains.”

The life and death stories in this novel touch on everything that makes life profound, beautiful, absurd, and heartbreaking. We follow each incarnation of Maya into the afterlife and learn:

“Love is. Love doesn’t go anywhere or come from anywhere. No thought of love is ever lost. You take it with you. Love is all that there is. And love is everywhere.”

Thanks to author Mark Tiro for this inspirational novel, and for answering my questions here about IMPLICIT: Soul Invictus…

Have you incorporated any of your own past into your writing?

A lot of people ask me after reading the book if the character of Maya Lee is real. Before I started to write, like Maya, I had worked as a public defender in Los Angeles. I’ve tried to incorporate snippets of a lot of things, personalities and places, that I’ve gotten to know – to see – close up… Once I was able to sit down and reflect on it all though, I realized just how deep and profound – how much of an impact – some of these things I’ve seen have had on me.

“Still waters run deep,” as Marianne Williamson used to say. And so, the closest thing I can say about Maya is that she’s arguably the best lawyer I’ve ever known… But of course, maybe that’s why I ended up a better writer than I ever had been a lawyer. Somewhere deep down, I’ve always known not to get in a fight with Maya because she’d probably win.

What inspired you to write IMPLICIT?

I used to work out at the gym, years ago, a lot more than I do now. One day, a friend of mine who lived within walking distance invited me over for lunch, after our workout. Well, on his bookshelf, he had all these books – some I’d heard of, some were new to me. Everything from Zen and the Art of Motorcycle Maintenance to Way of the Peaceful Warrior to Paolo Coehlo’s The Alchemist.

He also had a tattered, old paperback copy of Richard Bach’s Illusions. He lent it to me that day, and I took it home and read it. That book – the ideas in it, I think, was what really set me on my life path.

I then read The Celestine Prophecy, The Prophet, Man’s Search for Meaning… even Mitch Albom’s Tuesday’s with Morrie. Eventually these all led me at some point, to a trip to Temecula and a quiet afternoon where I was able to meet Ken Wapnick. I really did come to appreciate his non-judgmental/forgiving take on A Course in Miracles.

What would you like readers to take away from the book?

I wanted to, above all, let readers get to know characters they would actually care about. So many spiritual parables seem to be so wooden. And so much spiritual non-fiction is just not as easy – at least for me – to read today as it used to be, years ago, before the internet.

Most of us now, because of the internet, Twitter, Facebook – being so interconnected – our attention span’s basically shot. The cardinal sin or maybe ‘cardinal rule’ now of anything, whether it’s a book, TV, a movie or a Facebook post, is just this: ‘Don’t be boring.’

And after years of ‘searching,’ I’d finally hit on something that helped lift the heaviness, the depression… something that helped me to just relax and not feel self-conscious when I was with people. As far back as I could remember, I’d always been on my own elusive search for the meaning of life, always trying to find an answer that just ‘felt right.’

I tried to show how this stuff actually looks in life – in this world we all seem to live in here.

Also, a lot of people don’t catch it the first time they read IMPLICIT: Soul Invictus, but I was curious how it would look in the real world, as someone goes through the stages of the ‘development of trust’ that A Course in Miracles describes. Maya’s journey takes her through all of it, and I was as surprised as anybody by the time I got to the end. It turned out that Maya’s journey didn’t look anything like I’d expected it would when I first sat down to begin writing.

In your Author’s Note, you say some of Maya’s lifetimes involve real people in history, such as the Greek stoic philosopher Epictetus. Why did you want to include them?

One of the themes that runs through and permeates the book is that in reality, time is not linear. Epictetus taught what we call ‘stoic philosophy.’ But Epictetus’ stoicism was only about one step removed from the Freudian Vedanta of A Course in Miracles that we know today. It’s also quite in line with a lot of the Gnostic teachings, and had quite a lot more in common with the Gospel of Thomas and non-dualistic Buddhism, than with what we think of today as ‘stoic.’

Plus, here was this great teacher – he was a giant, even in his own time, who at the end of his life, settled down with a woman he didn’t marry, and whose name has been lost to history, in order to raise the child of a friend (one who’d presumably died or been sent off) so that the baby wouldn’t die or be sold off into slavery. It was such a human thing to do – it really embodied all his teachings. I was really excited when I discovered I’d have an opportunity to write about that.

And of course, it just so happens that I knew of someone [an incarnation of Maya], who by complete coincidence, happened to be on a ship sailing to just the right place, at just the right time…

How is IMPLICIT connected to the next book you’re publishing in December and what can you tell us about that book?

A lot of people don’t know this, but IMPLICIT: Soul Invictus is actually the second novel I’ve written about Maya Lee. The first one I wrote actually slots in perfectly right behind it. So while IMPLICIT: Soul Invictus really is the beginning of Maya’s story – of the entire Spirit Invictus Series for that matter – in December, Book Two, ALL THESE THINGS: Maya Invictus, comes out. That book will actually go even deeper into Maya’s younger (and slightly wilder) years.

That book will tell the story of Maya and David [a client and spiritual teacher], and how Maya’s toughest and most brilliant courtroom battle jettisoned her off on an unplanned detour into her own personal dark night of the soul. The favorite feedback I’ve heard from my early readers is this quote: “Inner peace with an attitude – could be called Way of the Peaceful Lawyer!”

I’m also giving away a free novella called ONE MORE THING: The Lost Interview. It’s a small little snippet of Maya’s life after the events of – and complimentary to – ALL THESE THINGS.

You can download the free novella and learn more about the Spirit Invictus Series at www.MarkTiro.com.

IMPLICIT: Soul Invictus is available on Amazon Kindle at the special price of just $.99 through November 4, so download it today.