Faith Beyond Belief: Stories of Good People Who Left Their Church Behind – Book Review and Author Interview 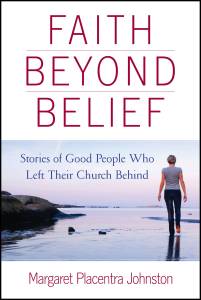 Guest reviewer Fred Howard is a physician as well as an ordained minister.  He recently authored Transforming Faith: Stories of Change from a Lifelong Spiritual Seeker, a searching personal consideration of the stages of faith development work pioneered by James Fowler and Scott Peck.  As such, he is quite familiar with the stage theory of spiritual growth that Margaret Placentra Johnston delves into so poignantly and beautifully in her work, Faith Beyond Belief.

In Mary Engelbreit’s famous quote, “If you can’t change it, change the way you think about it,” there is the tantalizing suggestion that if we change our way of thinking, then things will change. Margaret Placentra Johnston’s book, Faith Beyond Belief, gives readers a clear, concise framework for the process of spiritual growth and development that can change the way we think about it.

Johnston, a spiritual guide as well as a practicing optometrist, brings the lens of spiritual development theory to bear on her own journey as well as those of ten individuals that took the courageous steps necessary to embrace a more meaningful and fulfilling existence. Her easy, conversational writing style gives us a soul’s eye view of their ten touching and sometimes tragic stories. Being a lay person herself, Johnston brings a focus to the stories in ways that allow most any thoughtful and reflective person to find something of themselves in them. Her theory describes four stages: Lawless, Faithful, Rational, and Post Critical or Mystic.

Other contemporary authors have dared to venture into this topic, most notably Scott Peck in The Different Drum. However, Johnston more effectively communicates the theory by incarnating it in these lives she describes and discusses. Each story is a conversion experience – but not in the sense of a “conversion” as the reader might have been taught to conceptualize it. In the first set of stories, four of her subjects chose to leave the comfortable conformity of the religious institution in which they were raised and move from the Faithful Stage to the Rational stage. In each case they were “good people who left their church behind.” No longer defined by the tenets and dogma of the religion of their upbringing, they are no longer among those that are Faithful – neither to the church nor in their stage of spiritual development. All chose allegiance to the truth as it was emerging in their rational mind. This decision was invariably difficult and painful but, Johnston says, each person “rated living truthfully of higher importance than the convenience and safety of remaining in the religious community.”

In the second set of stories, we learn about six people that continued the process of spiritual development beyond the intellectual integrity of the Rational stage to the more inclusive, universal worldview of the Mystic stage. These are stories of everyday mystics, unremarkable people that see life in remarkable ways – as a mystery, as something to be cherished, as something to be lived in grateful service to others. Each of these individuals exemplifies at least one of the traits of this stage. Each has somehow transcended their indifferent circumstances to lead lives of grace, meaning, and purpose.

Johnston tackles this vital yet difficult subject with commendable tact and respect. Women and men of any faith tradition or no faith tradition at all should be able to find wisdom in these pages. The book resonates as both well-reasoned and intuitively on target as a way for us to make more sense of our spiritual journey. What the author is really talking about is growing up – growing out of the narrow belief systems and creeds that religious communities often use to define themselves and growing into more mature ways of being with others and into ways of better serving our diverse world.

Every once in a while, a book comes along that can change everything we think we can’t change. Change the way we think about the development of our spirit. Change our life. Perhaps in some small way even change the world. For our times, this is that book. Faith Beyond Belief is a gift!

FRED: Why did you feel it important to write a book illustrating the spiritual development concept?

MARGARET: Well, Fred, I am going to take that question in two ways. First, why did I choose to illustrate the concept? I thought using real stories about actual people transitioning through the stages would introduce readers to the theory, and let them recognize how much of what goes on in life can be explained by these stages. And I hoped it would inspire people to read some of the deeper texts. Spiritual development takes like an hour to read about, but the better part of a lifetime to understand. I thought the stories would serve as a great introduction.

Secondly, I will respond to why I thought it was important for people to learn about the stages. People are gong through shifts in their beliefs. No longer does the average person grow up in a closed community where just about everyone belongs to the same church and believes the same thing. People who are inclined to begin questioning the dogma they were taught as a child may fear there is something wrong with them, may become isolated. Parents whose children are leaving the fold may worry, or try to bring the person back to church. If people only understood that the questioning (or Rational) stage is a necessary step in spiritual maturity, people going through it would be spared the suffering. Moreover, they could be encouraged instead of held back by more conventional forces.

Also, it is important to understand the spiritual journey, because some claim our whole society in general is going through roughly the same stages that happen at the individual level. The Enlightenment corresponded to the Rational/questioning stage. We are now in maximum chaos because the old values are being put into question, and things can look really scary. Understanding the Post-Critical or Mystic Stage (or what you [Fred Howard] call the Holistic stage) at the individual level gives us a glimpse of what our society is growing into next, in a post-modern age. The stages allow us to face the scary societal changes in full faith that something better is coming next.

FRED: Are you saying religion will die out?

MARGARET: Not at all. I am saying that, as our culture evolves, our understanding of religion must evolve with it, or be rendered irrelevant. People are running into issues of cognitive dissonance when comparing the findings of science against the truth claims of religion – the Book of Genesis, for example. It becomes obvious that a lot of the claims made by our traditional religions cannot be true in a literal sense. Yet, every culture in every part of the world since the beginning of time has sought some way of meeting what turns out to be a universal human need – the desire to connect with something larger than the self.

By comparing one religion against another we begin to glimpse a bigger story – that each individual religion represents the attempt of one culture to meet that need to connect. That final stage of spiritual development brings a person to understand kind of the same perspective: all religions contain truth, but just not in a literal sense. Spiritual development lets us begin to glimpse a much bigger story about spirituality than any given religion teaches. It is time we let that bigger story out of the bag!

Faith Beyond Belief: Stories of Good People Who Left Their Church Behind is available on Amazon.com.